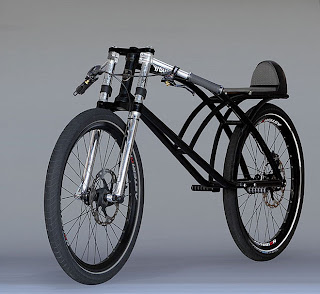 Gravity bike racing keeps gaining momentum, even after 30 years in existence. There’s an increasing number of ‘official’ events being held on hillsides all over the world, with a growing number of privateers who are developing gravity bikes in sheds, workshops, and garages, and the Tange tubing company is working with a number of partners to release a propriety frame: the Yasujiro Speed Bike.

Jean Christophe Charrier, under the pseudonym Jaycee, worked with Yasujiro, the frame-building department of Tange on the innovative layout, inspired by the 50cc ultra-lightweight class of Grand Prix motorcycle racers of the 60s, 70s and 80s. To further emulate those pocket rockets, 24-inch wheels were used, as opposed to the more-common 20-inch wheels.


Jaycee sketched the initial design, which was refined by the engineering skills of Antidote Solutions. Other partners provided services also: Facs Moto molded the fiberglass seat pan, Bos MTB made the double crown fork, the brakes were supplied by Shimano, the wheels by Asterion — which roll on Schwalbe‘s Big Apple tires.

The Speedbike is built for one thing only: going downhill fast. That may seem limited, but when you’re clocking 130km/h down the side of an alp, it might be all that matters. Serge Nuques was the first pilot of the Speedbike, a French enduro racer, rally driver and French Moto champion. Head to the Yasujiro website for more.